Born during a raging snow storm at the Elmendorf Airforce Base in Anchorage, Alaska, Hillary has been imagining monsters through a veil of snow ever since. (Author intrusion: Well, Ok, so not quite ever since. I can hardly imagine an infant picturing monsters when they’re barely able to focus on objects 20 inches beyond their little faces. That was an exaggeration that sounded nice before I really thought about it. Ahem…)

Hillary has been imagining monsters ever since she could hold a pencil and perhaps, a bit before that. You see, she came from interesting stock. Her parents, Dan and Becky Raque, and her sister, Hannah Jamieson, were (and still are), incredible enthusiasts and champions of Hillary’s budding imagination. From her father’s side, she gained a love of for world exploration and all things spooky. From her mother’s side, she earned a stout respect for the mind and the medical professions.

Hillary’s love of stories is no accident.

As a child (and even into adulthood), her aunts and uncles would regal her with tales of ghostly apparitions and crumbling castles. An uncle once scooted beneath the pool table with Hillary to draw a googly-eyed monster with the flame from his lighter. (Author intrusion: It’s still there and yes, I still crawl beneath to say hello.) Later, as a teenager, the stories became bolder and her grandmother finally shared her experiences working as a psychiatric nurse at Waverly Hills Sanitorium outside of Louisville, KY, back when it was known as Woodhaven Geriatric Center.

Hillary wrote her first story at age 7, at her mother’s office, given the luxury of access to the office supply closet. It was called “Jamex and the Toy Teddy Bear,” and she still has it. (Author intrusion: Jamex has to do chores to earn enough money to buy a teddy bear.) She followed that with a continuous collection of hand-stapled pamphlets with such titles as “The Ghost Book” and “The Strike of Light,” and wrote her first childish attempt at a novel, “Rockport Cottage,” a tale of a haunted house and a long-dead witch, when she was eleven. 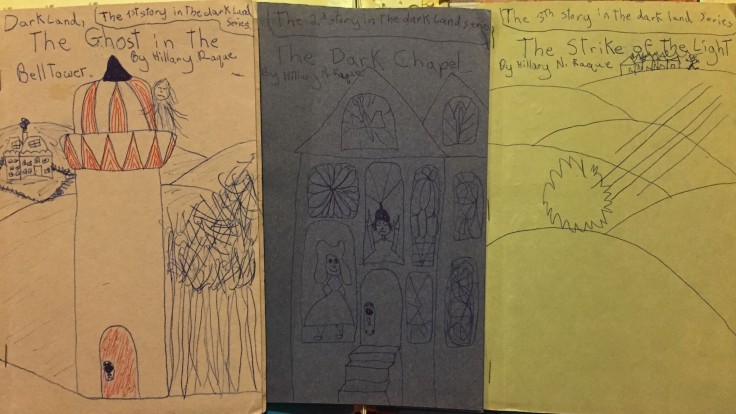 With her love of books and stories, it’s no wonder she was drawn to the field of library sciences. Hillary has a BA in English Literature and a Masters in Library Sciences. She has worked in a variety of library settings, from state archives in Massachusetts to public libraries in Colorado. Her professional passions include leadership, library management, and youth services.

Alongside Library work, Hillary has always written. And edited.

In 2016, Hillary and her Husband quit their jobs and relocated to Santiago, Chile where they spent the next two years researching and writing a cookbook. During that time, they spent months overlanding across the countries of Chile and Argentina with their 6-year-old daughter. You can learn more about their project at www.gourmetfam.wordpress.com. While in Chile, she edited non-fiction manuscripts, wrote for Rosen Publishers, acquired nonfiction for Gamut magazine, read slush for Pantheon Magazine, and did a number of freelance and ghost writing projects on top of all that.

Hillary and her family returned to the states in 2018. She currently works as a library director in Colorado, is an adjunct faculty for University of Denver’s MLIS program, and consults on food literacy nationwide.